Boreholes on the BBC News?! 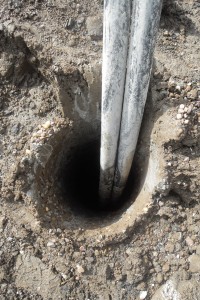 Boreholes and groundwater have made the 10 o’clock news! Is that a first? The BGS was on prime time TV explaining how groundwater levels are, in the south, approaching all-time highs.

The seemingly endless run of gales and storms since December has resulted in records being broken for rainfall, river flow – and now groundwater level.

But – wasn’t it only recently that groundwater levels were heading for a record low? It was February 2012 when we were busy drilling emergency abstraction boreholes for fisheries and farmers to save them from drought!

Time to remove your heads from under that pile of sand guys – the impacts of Climate Change are just starting to bite …..